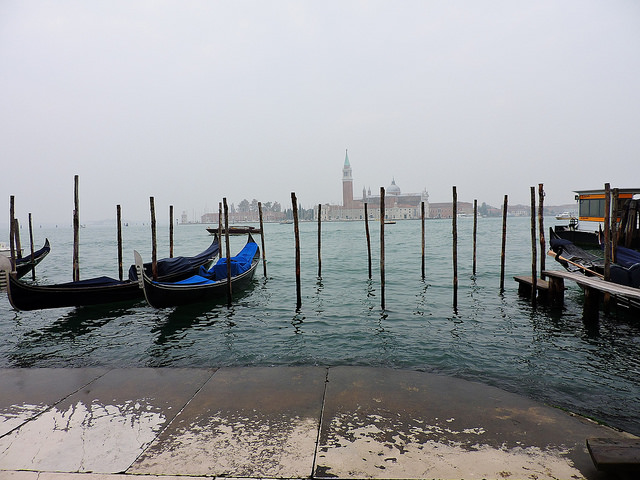 There’s a traffic jam at the Rialto bridge. Speedboats, gondolas, flat-bottomed working boats – all are stationary right back to Rialto Mercato. The boats are so packed it might be possible, if one were fit enough, to walk across the Grand Canal stepping from one vehicle to another. On the balcony of the Ca d’Angeli Nero, Floris and Boribel watch the mayhem.

It is 39 degrees Celsius. In the vegetable market the fruit has ripened to rottenness, vegetables shrivel and die. Only the packets of dried herb mixtures remain unchanged; Sale piccante, Spaghettata alla puttanesca, Risotto della Serenissima, ready to enhance – or disguise – the flavour of something’s flesh.

The red canvas awnings that shade the fish market are rolled away, everyone has gone home. A sliver of metallic saltiness lingers in the air. Dusty brown sparrows wander disconsolately on the stainless steel tables, highstepping as if their feet are being pricked by pins. On the jetty a one-legged pigeon seems to be sleeping, shoulders hunched, head sunk into its neck. It resembles a small gloomy monk, robed, beyond praying. The heat feels solid as sin.

A traghetto weaves, matter-of-fact through the traffic jam. Four passengers at two euros per head is a living – just. Floris and Boribel watch its progress. Shouts and full-voiced conversations drift up to them.

Floris and Boribel smile. They could cause more disruption but at this particular moment they are hungry. They abandon the balcony, move in to the richness of the palazzo. The traffic jam unknots. Somewhere a baby howls. A vaporetto with painted shades proclaiming, ‘There’s more to taste’ passes on its way to the islands.

Inside the palazzo, all is silent. Silk damask curtains puddle on the floor in deep red folds, painted shutters deaden the noises from outside. The walls are decorated with fantastic scenes; dragons fighting lions, warriors on horseback, their mounts caparisoned with embroidered velvet and gilded leather. Small putti, of plump cheek and jaundiced eye, whizz about. On the ceiling golden angels fly, their faces marred by damp and age, beatific smiles distorted into wicked grins. Cracks spiderweb all over the marble floor. Leatherbound books rot and fade. Only the huge, ancient grimoire is in good condition, its binding silkily preserved by the oil from many hands.

Floris and Boribel drink wine so dark it is almost black. They watch their reflections in golden mirrors, the glass spotted with age. The twins and their echoes bow and wink across the centuries. Candlelight and cobwebs are their natural habitat. Their mother is a friend to spiders, although their father was an honest man.

They keep the baby downstairs in a back room. The sound and smell of water is omnipresent there. The baby is fed regularly; good, nourishing food to make it grow. Once a day baby and room are hosed down with cold water, the waste hooshed straight through the door into the canal. Black fish with greedy mouths and gig-lamp eyes wait hopefully.

Every week the twins come down the marble steps to view the baby in its darkened room. The baby is pale as cream. Floris and Boribel push bony fingers into its flesh to check how plump it is. The baby learns not to scream. Over time it gets quieter and quieter. Soon it is no fun at all, even when they poke at it with sticks. They go back upstairs to the lush velvet and expectant candlelight.

The baby grows stout and juicy. Its flesh should be sweet as a pig’s. By now it is completely silent. The kitchen is currently its home. Vast bundles of herbs hang from hooks in the ceiling, strings of fresh garlic, bunches of marjoram, branches of rosemary. There is no longer a need to hose the baby down. Salt is rubbed into its skin.

Floris and Boribel eat and eat. They gorge on the rosemary-scented flesh, grease runs down their chins. They become so fat they cannot speak. Now the baby is reduced to skin and bones. The skin is hung over the balcony to crisp in the afternoon sun. At last only the bones remain. They are thrown into the canal where they float alongside the traghetto on its first commute of the day.

The traghetto gondoliers don’t notice the bones, nor do the passengers, but the fish do. Beneath the surface the water seethes and boils with greed. They nibble on the toes and fingers and then as the bones here are so tiny they move on to the ribs and spine to get at the marrow. The skeleton begins to resemble a floating sponge. Like a sponge the bones absorb water.

The constant passing of boats rocks the bones like a baby in a cradle, slowly moving the skeleton in a series of washes out into the lagoon. There, weighed down by the water taken in through the holes, the small skeleton sinks down to the teeming sludge. Sand eels swim through the chest cavity. Small pale creatures rest in the shelter of the skull. Gradually mud accumulates in the eye sockets and between the teeth. The skeleton swarms with life.

After a while it sits up and takes notice. It needs to grow, needs to replace the flesh that has been stolen from it. It needs to eat. It starts with those nesting inside its head.

Detritus gathers across its ribs, seaweed and nylon fishing lines snag on its pelvis. Soon a net forms catching small then larger fish. The skeleton absorbs them all. Accretions of silt and rotting vegetation build up into the semblance of a body. Small nameless things take root, begin to burrow.

Out of the Lagoon

Floris and Boribel are getting thin. It is a long time since Baby and they are hungry. Even the serpents on the painted walls look tempting, wavering in the candlelight as if alive. Floris and Boribel haven’t the energy to find more food, it is as if, in its silence, Baby has sucked all the life force out of them. They stand on the balcony of Ca d’Angelli Nero not even bothering to interfere with the passing traffic. Everything is too much effort. They have stopped going downstairs to see if they can find any scraps lurking in the kitchen. There isn’t even so much as a bone to gnaw.

Out in the lagoon something stirs and rises. It resembles a mass of grass and mud, perhaps washed away from one of the islands. The Venetians steer round it. They have seen such things before. The things always go away, in the end, after whatever needs to be done is done. One or two of the gondoliers cross themselves.

The thing seems to be seeking something. It avoids most of the Grand Canal. There are too many craft that might disassemble it. Creeping along the side canals it comes at last to the Ca d’Angelli Nero. It snuffles about at the back entrance. The small black fish that usually wait there hurry post-fin to hide under the Rialto bridge.

The thing extends a branch, dripping with creepers. It seems to be feeling under the door. One of the creepers slides through the gap here. The rest follows piecemeal. After so long underwater its bones are soft and loosely jointed. The step has a hollow between door and floor, from the passage of many feet over the centuries. Even so there is only just enough room for the ribcage, flattened, to squeeze through. It takes a very long time. At this stage the thing is more fluid than solid. It makes a slurping sound. Eventually all of it is inside the door. Water, thick with sediment, seeps back outside into the canal. The thing rests.

After a while it starts to move. The twiggy bits scratch on the stone floor, tentacles suck and hiss. Stray particles fall with a plapping sound. The centre contracts, re-forming itself. The thing becomes still. It waits.

Upstairs Floris and Boribel are frantic with hunger. They remember the black fish that haunt the canal entrance. Perhaps they could catch some. They might be quite tasty. Anything would be tasty now. The twins peer over the balcony into the Grand Canal but there is nothing. The constant passing of boats discourages fish, without a carcass to lure them. Maybe there would be some under the landing stage in the side canal. They could use a large pan from the kitchen as a sort of net, and hope to scoop up a good helping of black mouths. They go downstairs.

In the back room there is a pile of mud and twigs. The smell is appalling, at once fishy and meaty. Floris and Boribel hesitate but the allure of the black fish is too strong. They tiptoe towards the door. In their hurry they don’t notice the slimy gobs of sludge and branches, which trip them. They fall forward. Creepers wind round their legs and arms until they cannot move. The smell gets worse, not only fish and meat but something different, something very, very old.

Floris and Boribel scream and scream. The thing prods them at intervals until they stop. It pokes its twiggy extensions into Boribel’s ears, shoving deeper and deeper until the eardrums rupture. Floris shudders at each high pitched scream. The thing that once was Baby waits until the screams become groans then drops Boribel and moves towards to Floris. Small creatures with many legs fall off its limbs and scuttle towards the door.

Floris tries to follow them but is bound too tightly even to roll across the stone floor.

Two long, thin tendrils are pushed up Floris’s nose. Slowly they pass the sinuses then wriggle down the nasal passage, finally forcing the teeth apart as they come out of the mouth. The thing waits until Floris stops struggling, then it pulls and with a cracking of bones and a slurpy tearing sound the central part of Floris’s face comes away. Blood pools and gurgles in the empty space as Floris struggles to breathe.

The thing gathers itself together. All its twigs and appendages coalesce into one soggy mass. It watches and listens. Gradually Floris and Boribel stop twitching. Boribel’s screams quieten into whimpers. Then the only sound is Floris gargling damply. When they are totally still the thing moves. It gathers them up and winds them round and round with its tentacles. Only their heads are left free. Where the thing’s eye sockets might be they see a sticky darkness which gleams with a flicker, as of the flashing bodies of tiny fish.

Gradually the bindings tighten. At first it is merely uncomfortable, peripheral to their shock and pain but as the pressure increases internal organs rupture. Their bones begin to break. Crack, crack, crunch go the ribs, one after another. Air whooshes from punctured lungs. Their hearts slow, the gaps between beats becoming longer and longer until the blood stops pumping round their veins and arteries. The twins’ heads fall forward. Their bodies are limp and heavy.

The thing gathers itself together, waits another hour and then begins to unravel. Floris and Boribel are abandoned on the stone floor. Now they are nothing but tangles of old clothes and bloody flesh. The thing dries out and starts to crumble. Eventually, all that is left is the clean, white skeleton of a human infant and two bundles of velvet and silk rags.